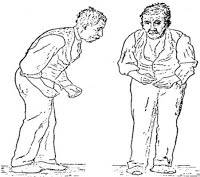 Description – This is quite a common condition, affecting about 1% of everyone over 60 years. The disease often comes on slowly with a tremor (especially at rest) stiffness, slowing down of movement and instability. NB it does not affect mental function, so people with Parkinson’s disease think and have emotions just like others of their age, because they move slowly does not mean they think slowly!

Cause – Dopamine is a transmitter substance in the brain, in Parkinson’s disease (PD) the dopamine creating cells in the middle of the brain (substantia nigra) die faster than they are replaced and because they produce less dopamine, the motor part of the brain is slowed down. The cause is uncertain, there is a slight genetic tendency, but oxidative stress, cigarette smoking, possibly herbacide and pesticides, and obesity have all been implicated.   Some people also suggest that the disease may originate in the gut and be transmitted through the vagus nerve.

What doctors can do

Drugs – There are a number of drugs which can be used, but these only address the symptoms, and have little effect on the longer term progression of the disease.  Newer possible disease-modifying drugs are being researched, but are not yet available.
L Dopa (which is like dopamine) is the usual  medication given to Parkinson’s patients, usually it is combined with other drugs to reduce the side effects (carbidopa).
Dopamine agonists which directly stimulate the dopamine cells can be very effective too (bromocriptine, cabergoline), and can be used with L-Dopa or instead of L-Dopa in younger patients.
Selegiline (a MAO-B inhibitor) has a milder effect.
Anticholinergic drugs like Benztropine have a mild effect and are often used in younger patients (<70) where tremor is the major problem.

Amantadine is an antiviral drug which seems to have some benefit in patients where rigidity is a problem.  Its mode of action is unknown.
Many of these drugs are effective, but with time their benefits can become less, and some doctors suggest holding back until symptoms warrant their use as there does seem to be a fixed duration of their benefits.

What you can do

The Nutritional supplements I use and recommend to my patients

There are a number of other therapies which you might like to look at.  They have not been specifically included with this disease because some are a form of treatment which is applicable to most diseases and many focus on the mind, body, spirit, and the universe. These include - acupuncture, Ayurvedic medicine, energy healing, homeopathy, naturopathy, prayer, visualisation and some people with this condition might like to look at these topics (I have described them more fully on another page on this website click here .) With my personal experience and reading, I do not think that I can comment of whether one or a number of these might help.    They fit well with most conventional and complementary treatments and I suspect some or even all of them can be extremely powerful - if performed by an experienced practitioner.    My only caveat is that if in the course of one of these therapies, you are given potions or herbs, do check with your health practitioner that they will not interfere with other treatments or drugs you are receiving.

I believe in today's world that nutritional supplements are so necessary as to be an essential component of any form of both prevention and treatment. Not only is today's food lacking in nutrients because of the way it was grown and processed, but also most of us make the wrong choices in diet. It is virtually impossible to obtain optimal levels of most of the vitamins, minerals and other nutrients although many people try to do so, and even then fresh produce is not available all year round. *There are many quality supplements available on the market, including –Thorne, NFS, Douglas Labs, Xtend Life, True Star Health, USANA, and Metagenics. There are others, but do your due diligence before choosing one. USANA Health Sciences has added a new adjunct to its multivitamin and multi mineral called CellSentials. These are a patented blend of phyto-nutrients which they believe affects cell signaling and growth, and increases the production of preventative antioxidants within the cell. These should add to the value of the multi, so these are the multivitamin/mineral preparation I recommend.