One of the most frequent questions I am asked as a Cardiologist and physician is – “do I really need to take Statin drugs?” On one side doctors are suggesting they be incorporated in a polypill which everyone should take, to other more ‘naturally based’ experts saying they do not work and people should not take them (click here)

This article is my assessment from the current medical literature, and the advice I give to my patients.  Because the article is quite long, I will put my conclusion first as well as at the end, but I would encourage you to read the reasons for these conclusions as well.

My Conclusion – sifting through all of the data below, my recommendations are relatively simple:

Statins – overview of the data –

Few drugs have caused so much debate as have the statins. They are without a doubt the most successful and lucrative drugs of all time in their prescribing, hence the enthusiasm of the pharmaceutical industry not only to retain their use in their primary role (preventing cardiovascular disease) but also seeking other possible benefits.
To the medical profession, these drugs are considered mandatory therapy for patients with definite cardiovascular disease, while to many complimentary therapy practitioners, they are considered to be almost poisonous. In the role that I’ve taken with this website, I will do my best to give an unbiased view, and then conclude with my thoughts.
There is no doubt that deaths from cardiovascular disease are falling (see graphs for deaths in the UK and USA) and have been doing so since the 1960s. Looking at the graph there was a sudden rise in the 1920s and 1930s, a flattening in the 1950s and then a fall since 1970. The statin proponents claim that this fall is due to their medication, but this does not explain the rise in the 1920s or the fact that the flattening and reduction occurred before the introduction of the statin drugs (in the late 1980s). At the same time we have had improved 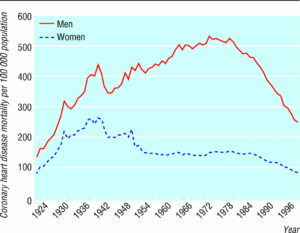 diet, encouraging exercise and other lif 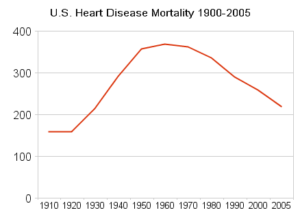 estyle changes, a huge reduction in cigarette smoking, other drugs including beta-blockers and ACE inhibitors, major advances in open-heart surgery and angioplasty. It is hard for anyone of these to claim the credit, when in fact it is almost certainly due to a combination of all of them, and possibly other factors that we don’t yet understand.

There have been more trials on the statin drugs than almost any other drug in the history of mankind, unfortunately the majority have been under the financial control of pharmaceutical firms, which does give some concern about the impartiality of the results. For example many of the early studies showed a very low incidence of side-effects, but in a number of these trials patients were given the active drug (statin) before the study, and if they did not tolerate them they were not included in the trial. This of course hugely reduced the incidence of reported side-effects.

For those who are interested here is a review of the important trials, if not, skip to the following paragraph for the conclusions from them:

It is also believed that older people receive much the same benefit at least till the age of 75.

There is debate on what level of cholesterol doctors should be aiming for, or whether high doses of statins (which undoubtedly produce more side-effects) are more beneficial than lower doses. There is almost no evidence that non-statin drugs provide the same benefit as the statins. To the extent that many evidence-based papers do not recommend the use of or the addition of non-statin drugs especially in primary prevention.

Conclusions from the trials – statins undoubtedly do reduce the incidence of cardiovascular disease and death, and for those at higher risk the chances of  benefit are obviously greater. There have been numerous meta-analyses (reviewing a number of trials and putting the results together) and these have shown:

Calculators have been provided for patients and their health professionals to calculate the risk of cardiovascular disease or death, but I think the information in the last 2 paragraphs fairly summarises the situation. To calculate your cardiovascular lifetime risk you can use the QRISK calculator (click here).

There is no doubt that the statin drugs do reduce cardiovascular disease and strokes and death, but they do come at a cost, with significant side-effects. The fact that some of the trials had a run-in period on the active drug and patients with side-effects were eliminated has led to an underreporting of side-effects.    Also, some of the side-effects are rather subtle, and many patients suffer from them long-term without appreciating that they are caused by the drug. The side-effects include:

Sifting through the information above, my conclusions and recommendations to my patients are:

It is very valuable to be able to diagnose early coronary artery disease before it starts causing symptoms. The reason for this is that for almost 50% of people who die of a heart attack, their sudden death is the 1st indication of any problem. (Click here). For this reason cardiologist have been seeking diagnostic tests for many years to identify people at risk of having a heart attack, and treating them before it occurs.

Resting ECG has very little value, and even an exercise ECG has not been shown to improve the diagnostic ability or outlook (click here). Coronary arteriograms (taking x-ray pictures of the coronary arteries), or CT coronary arteriogram is are expensive, and not without risk. Perhaps the most valuable test is also one of the more simple, cardiac CT scanning for the presence of calcium.

CT Calcium scan – When cholesterol starts building up in the artery wall it forms what is called a plaque. Initially this is simply made up of cholesterol, but as it gets bigger and weakens the artery wall, fibrous tissue and then calcium become incorporated into the plaque. One of the problems is that 60% of all heart attacks result from small plaques that do not cause major narrowing of the artery (so cause no symptoms of changes on stress testing). The plaque can rupture, a clot forms and the artery blocks completely, frequently causing sudden death or a heart attack. Therefore the ideal approach is to identify plaques as early as possible. 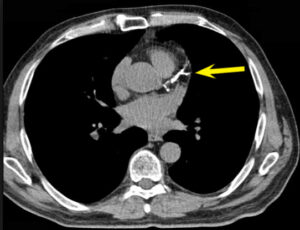 X-ray machines can detect calcium (it is the calcium they can see when you have bone x-ray) but because the heart is moving they cannot detect the calcium in the coronary arteries. Fast spinning CT scanners attached to the ECG can take CT x-ray pictures of the heart when it is stopped between beats. This enables the arteries to be seen, and if they have calcium within them, this could be seen on the x-ray (see picture).

Because it takes some years for the calcium to develop, there is no point in doing a calcium scan before the age of 40 to 45, but thereafter it is probably the best predictive test for silent coronary artery disease (click here)  For this reason cardiologist used this test to identify people at risk.